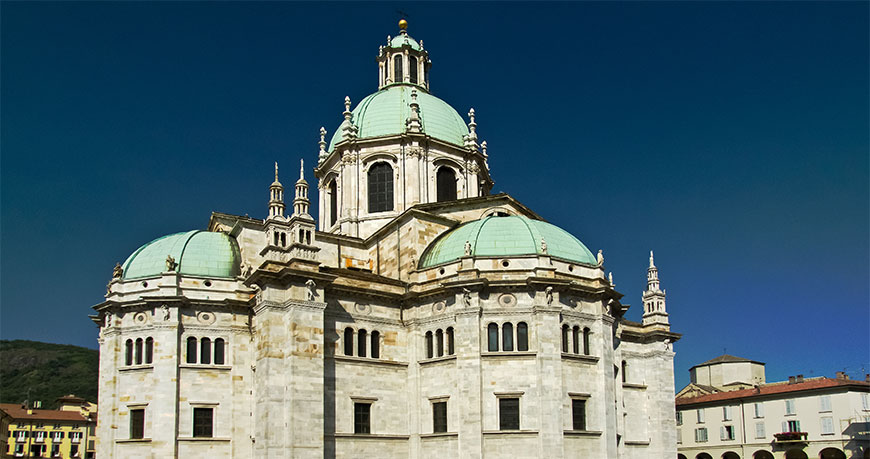 The Duomo is the result obtained from four centuries of work, construction began in 1396 above the ancient Romanesque basilica of Santa Maria Maggiore, which became an episcopal seat in the early 11th century.

Observing the structure carefully, it is easy to distinguish the different eras and different styles: from the superb marble late Gothic facade to the dome of Filippo Juvara of 1740, the year in which the imposing church was completed.
Numerous artists lent their knowledge for the success of the work: among others, the famous architect from Lucca Lorenzo degli Spazzi who was initially entrusted with the direction of the construction site, followed immediately afterwards by Pietro from Breggia and Florio da Bontà from Como. The works continued with the realization of the rose window on the facade of Luchino Scarabota, Amuzio da Lugano, Tommaso Rodari da Maroggia who, already active in previous years, was responsible for the construction site from 1487 to 1526. Among other things, Rodari most beautiful works of the facade, sides and interior, and created the model of the apse, later modified by Cristoforo Solari.
The right apse was erected under the direction of Francesco Maria Richino (1627-1633), the left one was started by Carlo Buzzi (1653). For the complete construction of the facade it took more than fifty years in fact, it was started in 1447 and ended in 1498; the rose window was completed in 1486.
The main portal is flanked by two aedicules with the statues of Pliny the Elder and Pliny the Younger: the two famous writers and officials of the Roman Empire, born in the first century AD. in Como, they were placed in a position of honor, despite being pagans.
The two side doors that open on the sides are generally considered the masterpiece of the brothers Tommaso and Jacopo Rodari, even if an intervention by Bramante was envisaged for the elegant southern door; the richly decorated northern door is called "della Rana" by a sculpture mutilated in 1912. The dome, modified in 1773, was brought back to its original shape after being damaged in 1935 by a fire.
The interior is a Latin cross, with three naves divided by cruciform pillars. It houses a rich complex of works of art, including 16th and 17th century tapestries, made in Ferrara, Florence and Antwerp.
Sixteenth-century paintings by Bernardino Luini and Gaudenzio Ferrari; a wooden altar of the early sixteenth century, dedicated to Sant’Abbondio, with a precious carving work, work mainly by the workshop of Giovan Angelo del Maino; Baroque stuccos by Francesco and Agostino Silva and nineteenth-century stained glass by Giuseppe and Pompeo Bertini. The two stylophor lions (late 11th - early 12th) that support the holy water fonts, the bishop's sarcophagus and the main altar of the Campionese school, recently relocated to the presbytery, come from the Santa Maria Maggiore church.