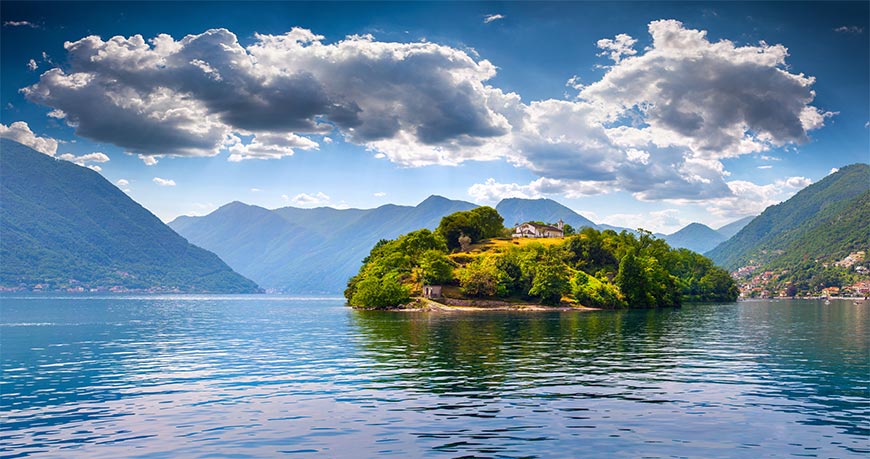 The only island on Lake Como, there is a splendid natural park enriched with a precious historical and artistic heritage.

In Roman and early medieval times, Comacina Island was an important military, political and religious center: since the late Roman Empire it was a stronghold, thanks to its strategic position. In different eras, ousted monarchs and noble fugitives found shelter on the Comacina Island. The island grew and became so powerful that it sided against Como in the ten-year war, allying itself with Milan.
Taken by the Comaschi allies to Barbarossa in 1169, it was devastated and razed to the ground, its castle and its churches destroyed. The inhabitants were forced to flee to Varenna with no hope of return, and nothing was rebuilt for centuries. Still today, the exodus of the Comacini and the welcome of the Varennaschi are celebrated every year on Saturdays and Sundays of the week when June 24, the feast of San Giovanni, falls.
The island changed hands through several owners, until it belonged to King Albert I of Belgium who donated it to the Italian government, until in 1927 it was declared a Moral Entity, Comacina Island Foundation, under the responsibility of the Accademia delle Belle Arti of Brera , intended for the construction of houses for Italian and Belgian artists.
The Isola Inn was built in the 1950s.
Reaching the island is easy: by land, up to Ossuccio, where there is the Museum, in the management of the Municipality of Tremezzina. Or with the boats of the Navigazione del Lago di Como or there are some taxi services with motorboats and private boats departing from Como or from any hotel on the lake.