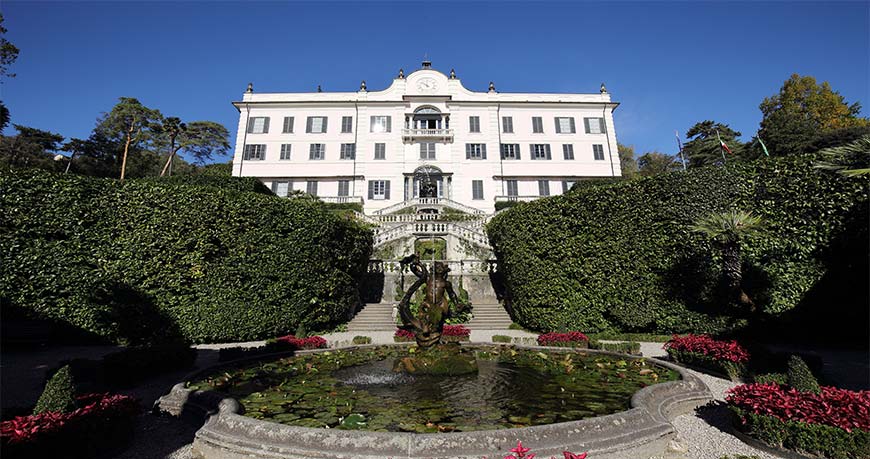 One of the most famous villas of the Lario, stands on a morainic hill on the western shore of Lake Como and occupies an area of ​​70,000 square meters.

It was built, as a country house, around 1690 by the Marquis Giorgio Clerici, an important personality from Spanish and then Austrian Milan, to which the large "C" inserted in the lake gate refers. He decorated it with the magnificent Lombard Baroque painted ceilings on the second floor and with the Italian garden, with stairs, balustrade, fountains and the dwarf waterfall. The name of the architect who designed the villa, high above the lake, at the top of a terraced garden is unknown.
The residence was sold in 1843 to Princess Marianna of Nassau, wife of Prince Albert of Prussia, who in turn donated it to her daughter Carlotta, from whom it takes its name, on the occasion of the wedding with the Grand Duke George of Saxony Meiningen. The latter owner is responsible for extending the garden, with the addition of the "English garden", known and appreciated all over the world.
The Saxony-Meiningen kept the property until the First World War and reorganized the park by inserting new species and varieties of plants. The villa contains Canova marbles, including "Cupid and Psyche", the villa's most famous work, the great frieze by Berthel Thorvaldsen with the entrance of Alexander the Great to Babylon, sculpted from 1817 to 1828, the last kiss of Juliet and Romeo by Francesco Hayez, frescoes by Appiani, tapestries and furniture from the XVIII-XIX centuries. In the neoclassical chapel (1855) there are high-reliefs by P. Marchesi.
Since 1927 the villa has been owned by the state, which manages it through the autonomous body Villa Carlotta.