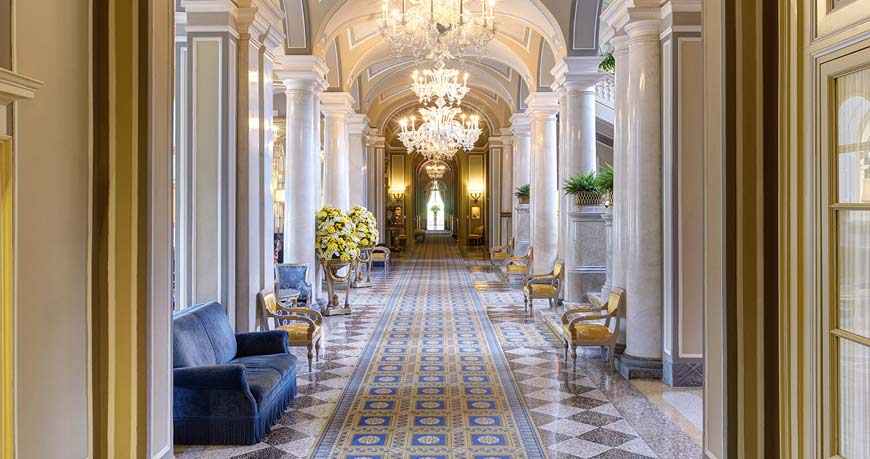 It is a place full of charm; natural beauty and architecture make up an unforgettable picture, made even more interesting by historical memories. And if all this lake coast is suggestive, Villa d'Este is its gem.

Here, among woods and meadows, facing the lake, the Bishop of Como Gerardo Landriani founded in 1442 a convent of nuns, a monastic peace asylum and ideal location for the life of prayer. Subsequently this palace, which belonged to one of the wealthiest and most powerful families in Como, was called Villa Garrovo, named after the small stream that runs through the park and flows into the lake at the entrance to the avenue. Access to the building by land was uncomfortable at first and it was preferred to get there by water. A pleasant garden, not as large as today's park, enclosed the pleasant residence with a band of greenery and flowerbeds. At the time of the cardinal, the villa housed men of letters, politicians, dignitaries of the Church. The fame of its beauty and the life that took place there was such that the son of a sultan of Morocco wanted, during a trip to Europe, to visit it.
In 1749 it was rented as a house for the Jesuit spiritual exercises, thus returning to its original ecclesiastical function; in 1769 it was rented by Count Mario Odescalchi, and in 1778 by a colonel of the Austrian army, Count Marliani, who did some adaptation and restoration work on it. The scenic uphill avenue was recomposed and restored, with its Invitation Nymphaeum, called "the Mosaic", with the beautiful cascading water chain, unique in Lombardy, and with the temple or terminal nymphaeum, where the neoclassical group stands out of Hercules and Lica.
In 1814 a salient event took place in the history of the villa: Princess Carolina of Brunswick, consort of the Prince Regent of England, was a guest of the Pino during a trip on the lake and decided to buy the villa. The following year the contract was finalized and the princess settled permanently in Cernobbio. The village thus became a kind of very small capital, frequented by very high personalities. It was that singular lady, adventurous and very little royal in private life, who named Villa d’Este the distinguished building, which it sumptuously restored, enlarged, made worthy of hosting a joyful and carefree court, which someone called the little Versailles.
Those were the years of maximum splendor of the villa. An original four-room apartment, called the Greek, Roman, Etruscan, Egyptian, stood next to the Napoleonic gallery. In 1820 Carolina left Italy, deluding herself that she could sit on the throne of England; instead he died on August 7, 1821 at the age of 53. And for the villa a period of abandonment began. The property passed to the princes of Torlonia, then to the Orsini. In the period 1820-34 the villa was not cared for, except in 1825 for the visit of Francesco I.
A new period of splendor and unheard of magnificence had the villa from 1868 onwards, when Maria Feodorowa, Tsarina mother of Russia, resided there to come and seek in this environment of beauty and peace a well-deserved rest after a life full of events. Receptions, parties with fairy lights in the park and on the coast, fireworks and music. After two years the tsarina left and the sad sense of abandonment reigned. No ruler or prince, no family wanted to take on the enormous costs of maintaining the palace and park anymore. They would therefore have faced a period of decline, if a group of gentlemen, including Count Bellinzaghi and Senator Besana, had not formed the Villa d'Este Society, which in 1873 transformed the ancient building into a sumptuous hotel, which soon became a famous high-level international meeting place. The building was enlarged several times, while largely retaining its original stylistic character.
Many works of art enrich the palace and park; some date back to the times of the first owners, others were purchased later.