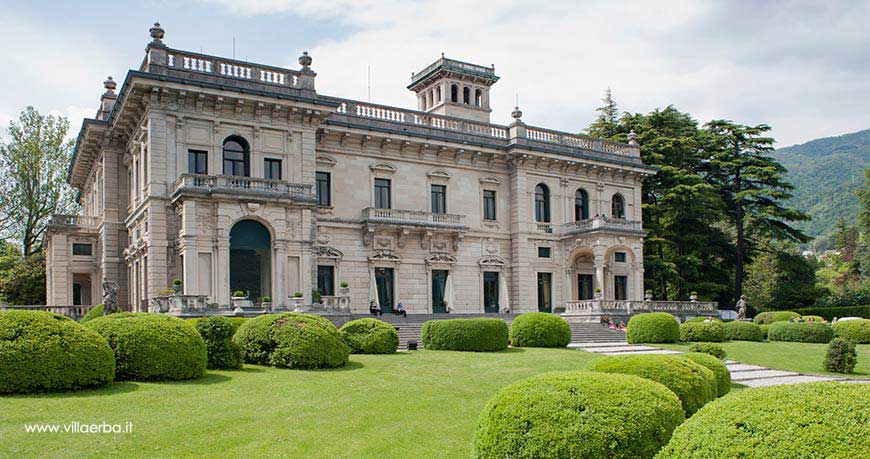 In 1816 General Pino ceded the large villa to Carolina of Wales, which was then called Villa d'Este and withdrew to an ancient uninhabited nearby convent which he had embellished and adapted as a stately home.

Subsequently the building passed from the Countess Vittoria Pino Calderara Peluso to another general of Napoleon, Giuseppe Cima.
The villa gained notoriety thanks to the hospitality that Donna Vittoria, grandson of the general, offered to numerous personalities of the time, including Arrigo Boito.
Between the end of the 19th century and the beginning of the 20th, not far from this building, a new villa was built at the behest of Luigi Erba, which had extraordinary dimensions. It is accessed through the park, whose size is due to the purchases wisely made by the ancient owners, who dedicated passionate care and huge means to it, arranging it definitively, defending it from the periodic floods of the lake, equipping it with exotic trees of rare beauty.
The new villa was erected in full view, in the splendor of the plants and the blue of the lake. The access porch, the atrium, the well-decorated and furnished rooms, the majestic polychrome marble staircase, were designed and implemented by the architects Savoldi and Borsani. It is the only park on the lake that is completely flat and with a prevalence of deciduous plants. The garden becomes a relaxing opportunity, a relaxing break between a business meeting and another. A fascinating botanical walk underlines the importance of the centuries-old arboreal heritage, enriched by collections of azaleas, hydrangeas and multi-colored flower beds.
The extensive free area of ​​the Gallop offers the possibility to organize large cultural, sporting and entertainment events outdoors. Private berth and heliport complete the functionality of the greenery. The director Luchino Visconti lived there.
In the park of the villa there is a modern exhibition center: Spazio Villa Erba.