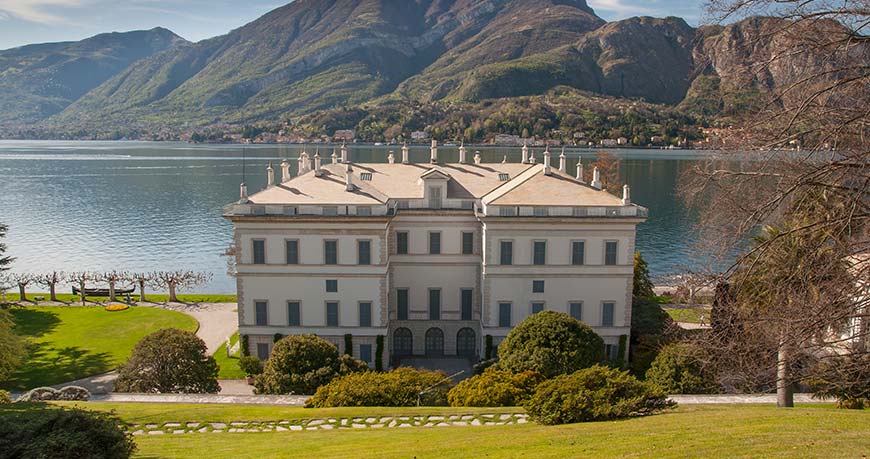 The villa, commissioned in 1808 (and completed in 1810) by Count Francesco Melzi d'Eril (who fought alongside Napoleon in the first campaign of Italy and was appointed by him as Duke of Lodi and personal adviser) is currently the residence of the Gallarati family Scotti, and it is not open to the public.

Instead, the garden can be visited, still partially preserved in "landscape style", according to the taste of the late eighteenth century and so requested by Count Melzi d’Eril. A long avenue of plane trees starts from the landing place of the boats; Gardens of azaleas and giant rhododendrons surround the villa and enclose small hidden spaces such as the artificial cave or the Japanese pond called "small lake of water lilies". In the flower beds near the villa and on the upstream balcony, classical busts and statues are displayed.
Visitors can also access the chapel, overlooking the small harbor of Loppia, which houses the tombs of the members of the noble family.
In the orangery adjacent to the villa there is a small museum where Napoleonic memorabilia are exhibited, a reminder of Count Melzi d'Eril's loyalty to Napoleon and war booty from the Egyptian countryside of the late 18th century: the statue particularly appreciated by visitors Egyptian depicting a dignitary from the court of Ramses II (around 1230 BC) and the lion-headed goddess of war. Hours: From March to October open all day 9:30 am - 6:30 pm