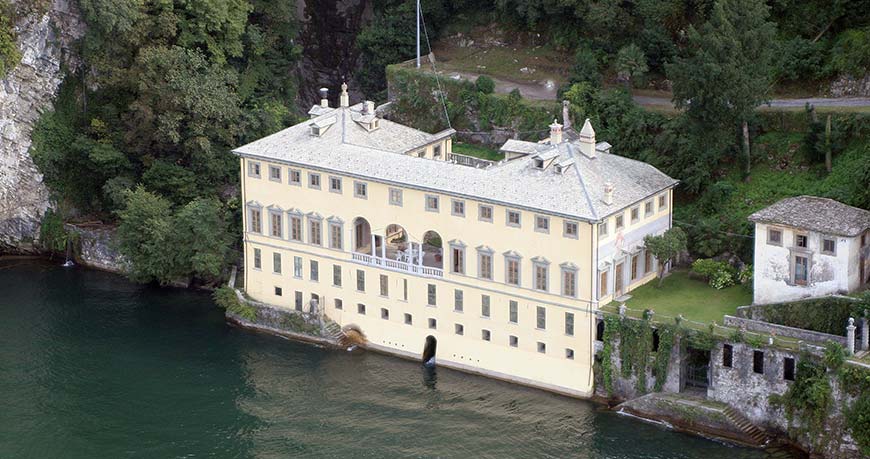 Built way back in 1577 by the count Giovanni Anguissola governor of Como.

In 1590 the governor's nephew sold the villa, apparently for a negligible amount, to Pirro Visconti Borromeo. The villa hosted important personalities including Napoleon, Byron, Volta, Rossini. Between lights and shadows, between sudden rebirths and long periods of abandonment and decadence - the English poet Percy Bysshe Shelley reported his state of decay until the last purchase, in 1983, by the "Plinian Society" which in May 2001 began the restoration of the tornasca villa, whose interior is sadly bare today. The Valperga family, after the sale in 1983, in fact moved elsewhere the precious furnishings that adorned rooms and rooms.
Inside the courtyard stands a statue of Neptune - the Greek god of the sea Posidone - as if to recall the imperishable fame of the Plinian fountain that continues to amaze over the centuries. The ancient splendor is however still testified by the artistic coffered ceilings with the painted bands below, by the mosaic floors with heraldic coats of arms, and by the beautiful Doric loggia, from which you can enjoy a splendid view of the first basin of the Como lake.
The intermittent source of the "Villa Pliniana".
A natural phenomenon that for centuries has made Torno known all over the planet. The protagonist of the phenomenon is a perennial spring water that feeds the famous "Intermittent Plinian Fountain" which is located inside the homonymous villa. Its name derives from the fact that it was Pliny the old and Pliny the young to describe it in their works. "A copious source that always grows and drops every hour": this is how Pliny the Elder describes it in his "Naturalis Historia". For a long time the experts - including Leonardo da Vinci at the end of the fifteenth century - wondered about the real nature of this dark and mysterious functioning. according to the most plausible modern hypothesis it would be due to the presence of a natural siphon in a karst cavity. When the water reaches a certain height inside the cave, it is discharged to the outside. Thus decreases the flow rate until the next internal accumulation and the new overflow.